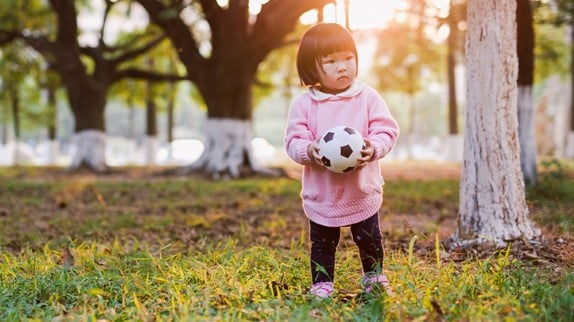 Earlier this year, we published a blog on the key milestones in early social development, and it was a bit of a hit with you, our lovely ParentTV community! It generated a lot of discussions, and prompted us to think about the other types of development little kids go through, and what milestones they have in those areas.

Among the PTV team, a lot of us remember the physical milestones of our kids more clearly than any others. We know when it was that our babies crawled or rolled or held their own bottle, or when our toddlers first started to wander around on their chubby little legs…As you can imagine, we got pretty nostalgic! But before we got too caught up in our memories, we wrote this list for you, on the key milestones in early motor development to watch out for if you have a child under four.

Important: Don’t forget, milestones aren’t definitive measures of development, and all children develop at different rates. So, if your child hasn’t hit a benchmark described in this post, don’t panic! They might just be taking their sweet time about it. If you remain concerned, seek advice from your GP or paediatrician.

At around this time, your baby will start to raise their head when you pop them on the mat for some tummy time. They’ll also develop their sucking, startle and grasp reflexes. Their arms will wave and their head will turn to the side when you touch their cheek. They will shut their eyes at bright sunlight, and begin to roll from side to side. They’ll start to reach out and try to grasp things you put in their hands.

When your baby is around six months, they’ll raise their head even more during tummy time, and their chest. They’ll even start to instigate their own tummy time, by rolling from their back onto their stomach, and back again. They’ll be using their vision more, to follow an object or person or respond to the sound of a nearby voice. A six-month-old baby may have started sitting up.

In this period, your baby will be able to stand up proudly when you hold their hands and pull themselves up using furniture or your leg. They might even make stepping movements to circumnavigate the couch! They’ll learn to sit unassisted, transfer objects between hands and pick up small objects in a pincer grip (thumb and forefinger). They’ll probably work out how to hold their own bottle, and they’ll start using their hands to feed themselves. They may give you a heart attack when they start trying to climb stairs. Their peripheral vision will improve and they will get very good at crawling (high-speed!).

WATCH: Does my child need to crawl before they walk? With Elise Easdown, Occupational Therapist

At this age, your baby will go from crawling to walking and then running and climbing everything! They might go back to crawling if they want to get somewhere in a hurry, because they’re pretty efficient at it by now. They’ll get their baby boogie on and start to dance in place to music and kick and throw a ball. Your 18-month-old will probably hold a crayon or pencil in their fist and scribble with it (and probably insist the resulting masterpiece goes on the fridge!). They’ll drink from a cup, and have a go at using a spoon and fork. When they fall down (which will be often), they’ll be able to get themselves back up again by pushing off the ground with their hands.

WATCH: Why movement and play are crucial in early childhood, with Maggie Dent

By now, you’ve probably got an active, energetic and excitable toddler on your hands. They’ll be a lot more proficient at walking, running and jumping. They’ll still like to climb things and they will go up steps one at a time. When they squat, they’ll be able to get up without using their hands. They’ll practice jumping down from a low step or over a low object, and will stand on one foot (and wobble wildly!). They will dance around to music and turn the pages of whatever book they’re looking at one at a time. Your toddler will be able to feed themselves, and will hold a crayon or pencil with their fingers to draw lines and circles (cryptic messages?).

WATCH: How kids learn through their injuries, with Teacher Tom

WATCH: When is the best time to toilet train my child? With Elise Easdown, Occupational Therapist

Your three to five-year-old child is making steps towards more physical independence now, and will start learning to do things like dress and undress themselves, with a little help from you. They’ll be able to hop on one foot, climb steps with alternating feet, throw a ball and attempt to catch it with their hands. They’ll become agile little monkeys on playground equipment around this time, moving with greater ease and dexterity. You’ll find out whether they’re left or right-handed when you see them hold their pencil between their thumb and two fingers. They’ll be able to use scissors to cut paper (and possibly their own hair…) and will feed themselves with far fewer spills and misses. Around this age they’ll also start to become toilet-trained at night and will be able to whip out simple but excellent song and dance routines!

WATCH: My child doesn’t hold their pencil properly, when do I need professional help? With Elise Easdown, Occupational Therapist

Get To Know Us